In the middle of the high mountains in San Marcos de la Sierra, you can find the humble home belonging to Kenia’s family, a tenth-grade student at Dagoberto Napoleon Sorto Cisneros Institute. Kenia is the oldest of her three siblings: Brenda, Elías, and little José. She grew up only with her mother while her father left the home to cross the border and live in the United States when she was only 2 months old. After her dad got to the USA he never contacted Kenia’s mom again, thus becoming one more Honduran family who constantly faces this issue. 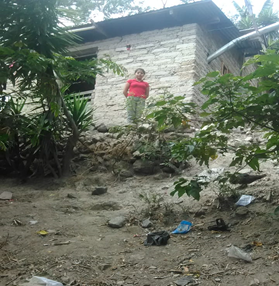 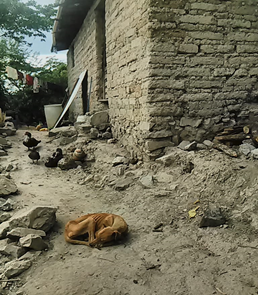 With a lot of effort, her mother made it possible for Kenia to attend high school, but in 2019 her life took a different turn. Feeling lonely and with little hope of continuing her studies, Kenia and her mother decided to travel to the United States, but it was a failed attempt. When they returned home, Kenia was very disappointed by what had happened so her mother encouraged her to continue with her studies and she did. Then, in 2020, during the pandemic, Kenya made two more attempts to cross the border. This time by herself, but again they were unsuccessful. 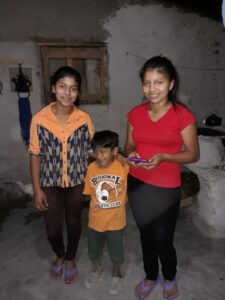 Kenia and her siblings

Her disappointment and frustration increased enormously when she realized that she had wasted much of that time without having studied nor completed her travels. Kenia’s mother kept insisting that she should continue her studies, yet Kenia’s hopes were very low. The pandemic was at a critical stage and the contents of her classes had accumulated. The need for a smartphone and the lack of economic funds to buy internet packages, all really made it seem impossible to catch up with every of her assignments.

Kenia’s mother took it upon herself to speak to the teachers, asking for one more opportunity and let Kenia to continue doing her assignments, even if they were returned late. They all agreed to print material for Kenia to work on. A few weeks after starting this plan, the tablet project was launched by Shoulder to Shoulder. Professor Josías, who is leading the Kolibri program at the San Marcos Institute had three tablets in his hands to give to the students with greatest learning difficulties. Without much thought, Professor Josías gave one of these devices to Kenya and he explained the whole process to make best use of the content. Kenia spent a lot of time learning where the videos for her assignments were, but it was worth it. Her teachers were surprised because at the end of the semester not only had she completed all of her assignments, she did it with academic excellence. Also, we learned that her siblings even benefited from having the tablet at home. 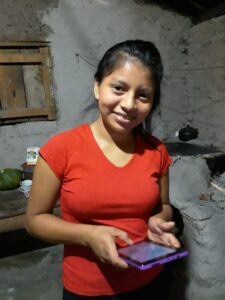 Kenia happy with the tablet

Kenia became a tutor for them and by using the installed Android applications, her younger brother learned how to read, and her sister began learning the multiplication tables. What a great impact!

After having this long conversation with Kenia, I asked her, “Would you be willing to continue your studies, if we include you in our tablet project?” With a smile on her face, she answered, “Yes! If I have the opportunity, I prefer to continue studying rather than leaving the country. I want to go to the university and become an English teacher.”. We are very happy to see that in fact education is a weapon to combat emigration and to learn more about the students whose lives we impact through our programs and hard work.