Absolute folly! A complete waste of time and resources! A recipe for disaster! An olympic-style, Honduran robotic team, particularly one from the backwoods of Camasca and Concepción, Intibucá is equivalent to the Jamaican bobsled team. This was the reaction to the lame-brained idea of Shoulder to Shoulder assisting and supporting the creation of a seven person, high school robotics team to compete internationally. I have to admit that I shared some of those reactions when we decided to do this in February. How could kids living in extreme poverty -- who had little or no resources at their high schools, many of who had never played a video game -- design and build a robot, travel to the United States, and compete among 157 other nations? I and all the other naysayers were proven wrong. Not only did they meet the challenge, they excelled. They achieved 40th among 163 different teams (the top 25%) and third among all teams from the Americas. They had an experience that will shine on for a lifetime, and hopefully inspire them to achieve previously unimaginable goals.

They dedicated themselves to working on this daily at our bilingual school with two committed teachers from their high school. They accepted assistance and support with grace and humility. Alan Ostrow and his robotics team from Pennsylvania Skyped weekly with the team, and he made two trips to Honduras. The team initially received little encouragement, even from other Hondurans, and in spite of this found the courage to believe in their inherent dignity and worth.

In the last few weeks before they left, things started to change for them. They started getting some media attention both locally and nationally. They were invited to the Presidential Palace to meet the First Lady. They secured passports and visas. The robot was built and functioning well. What had started out as pure folly was about to become real.

The travel day itself was one of the most exhausting days of my life, as well as theirs I’m sure, both physically and emotionally. We woke at 2:00 AM to board a bus for a seven hour trek to San Pedro Sula Airport. We thought we arrived with sufficient time at the airport. But none of these kids had any familiarity with air travel, and Honduras has strict laws and legal procedures for traveling with minors, particularly those unaccompanied by a parent. We literally all got on the plane minutes before the doors were closed and it pulled away from the terminal. In one sense it was fortunate that our connecting flight was late in Houston. It gave the seven young people time to begin soaking in all the sensory stimuli they had never before encountered or even dreamed of. They walked through the airport from gate to gate, heads spinning, drawn this way and that by what they could only understand as exotic attractions. The plane was delayed for a long time, and we would not get to Washington until early the next morning. Between retrieving our robot and luggage and hooking up with the FIRST Global driver who would transport them to their dormitory, it was at least 3:00 AM. Personally, my head did not find a pillow until 4:00 AM.

At 7:00 AM, they were all up and at DAR Constitution Hall to begin their practice rounds. I and Laura, staying at a different dormitory further away from the hall, did not arrive until 9:00. Still, we were beyond exhaustion. I took great pride in having gotten them there, something I would never have imagined possible. I also found myself in tremendous admiration of what they had already accomplished against what seemed insurmountable obstacles. There was something these kids had that was tremendously special, but I hadn’t as of yet named it, or understood it. What was the purpose in doing this, in exerting such great effort and resources, overcoming entrenched obstacles, simply to bring seven poor kids from Honduras to the United States with a robot? What would be the gain for these kids, for Shoulder to Shoulder, for Intibucá, for Honduras, or for the world? What was the meaning of it? I sat in the stands watching the practice rounds, hoping, perhaps even praying, for some insight. 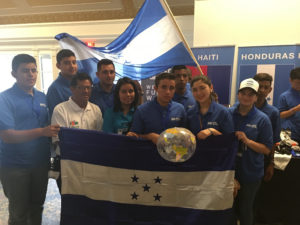 Team Honduras was paired up with Kazakhstan and another country against three opposing countries. Alexis stood next to a young man from Kazakhstan. Alexis is a gifted student to be sure, but he was even more sleep deprived than me and he speaks no English. Just as I considered this whole odyssey a folly back in February, now I would never in my wildest fancy believe that Alexis from Concepción, Intibucá could manage conversation with a sixteen year old from Kazakhstan.  Clearly impossible! But I’m watching something that defies all logic. The teenager from Kazakhstan throws his arm around Alexis’ shoulder and they open their bodies to one another. Both have wide smiles on their faces. Alexis says something and they both are laughing. They are engaged. They are forming a friendship, and they are doing it with such ease and grace, and I am thinking this moment should be enshrined and worshipped. I have received the insight I was searching for.

Alexis and the teenage boy from Kazakhstan yielded a reflection for me. There is so much in our world that belittles and demeans us. There is war, oppression, and poverty. These are born of fear, mistrust, and insecurity; a basic unwillingness to risk relationship with someone who seems different than me. These terrible sins against the dignity of human life are born in fear, but sustained in cowardice. It takes a great deal of energy and resources to maintain that cowardice. But peace is born in the simple belief that all others, no matter how different they appear, are worthy of attention and engagement. Peace is born in trust, but sustained in courage. Oddly, cowardice is so costly, so consuming, whereas courage demands only the natural response of a heart. One teenage boy lets his hand fall softly against another’s shoulder and suddenly all things are new and nothing is impossible.

Please forgive the length of this blog. There is just so much that happened for us and the robotics team in their journey to the US that I want to do it justice. After the competition in Washington, the team traveled to Ohio. They met with people who are supporting them and will support them and the education mission of Shoulder to Shoulder. This is not the end for the robotics team, but only the beginning. They will continue to meet here in Honduras and invest themselves in transforming their amazing experience into hope and service for other young people and all the people of Southern Intibucá. We have many people to thank for the success of this incredible journey and much more to share.