When we talk about the robotics program, we don't mean accomplissing the task of building a robot. With this type of projects we are eqquipint our youth with the STEM tools to enter in this competitive labor world.

During five consecutive years, students from Intibucá have had the opportunity to represent Honduras in the First Global robotics competition .  Every year, a different nation hosts the FIRST Global Challenge where teams from all over the world cooperate to achieve missions in a game that simulates the struggle against one of the biggest problems facing our planet. The youth gets together to solve problems and promote mutual respect and collaboration with the participants all across the world.

This year the competition was held from October 13 to 16, 2022 in Geneva, Switzerland! More than 180 countries came together face to face in a spirit of purpose, unity and global collaboration. There is no more fitting location for this year's FIRST Global Challenge than Geneva, the “Capital of Peace” where nations come together to resolve diplomatic challenges and where scientific innovation flourishes. 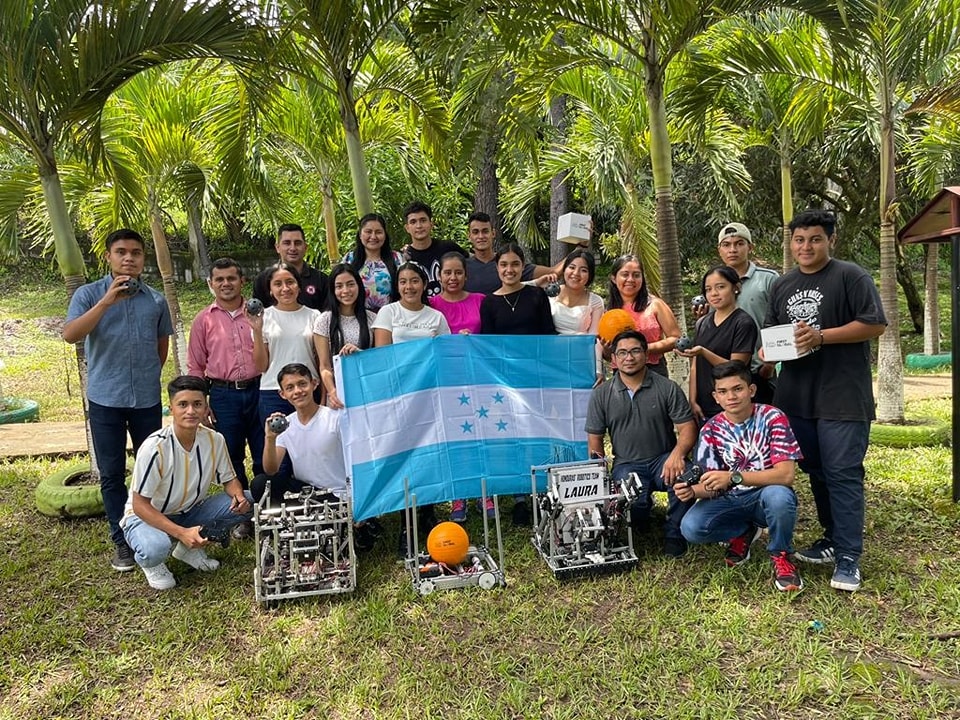 The 16 team members come  from small towns in the department of Intibucá's southwest border sector. They are students with various expectations, but they all have similar objectives, aspirations, and challenges that they must deal with on a daily basis. However, they all share the same short term goal, which is to concentrate on finishing their studies and earning a university degree. This will enable them to help our communities, as well as our municipalities, departments, and our country, in moving forward. Eight mentors were also prepared to guide this group of very clever lads.

During three consecutive months (July- October), our students joined their efforts and intelligence to build a robot that would fulfill the functions established to participate in the competition. Five students were selected to represent Honduras. The challenge was based on the collection of carbon. Richard,"our robot" was designed to collect and throw carbon balls at the collector. At the end of this activity, it had a mechanism to hang itself on one of the collector's bars. 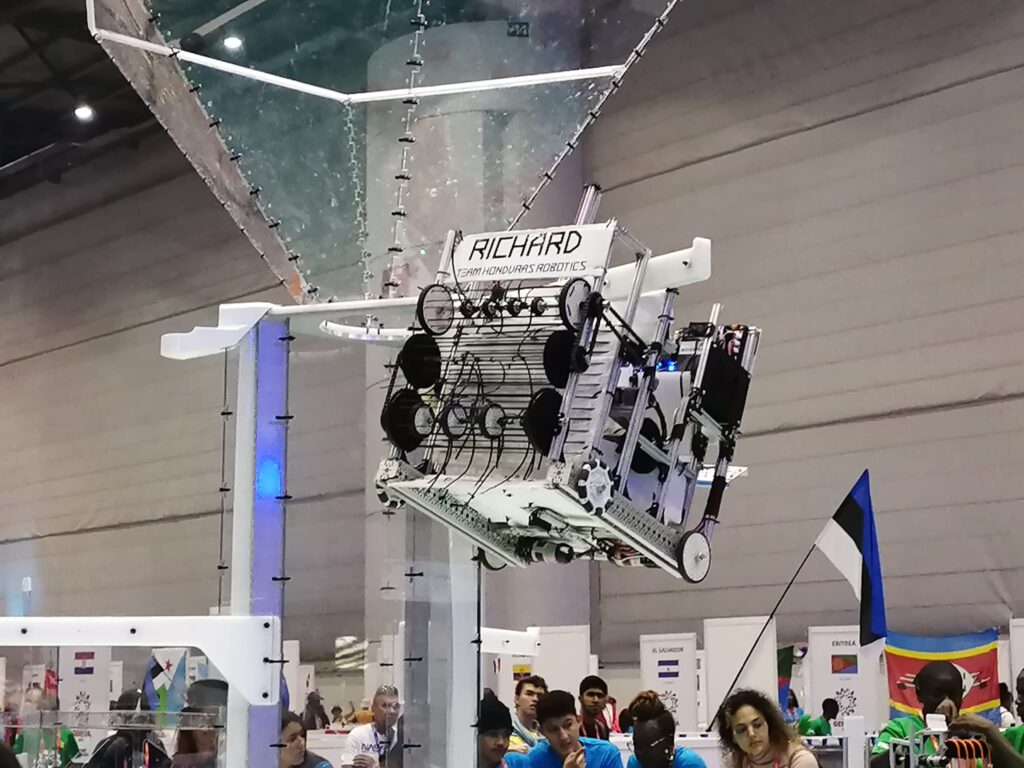 The happy moment when "Richard " the Robot  hung up in Switzerland

At the opening ceremony, the team proudly wore the traditional Honduran costume. There was a lot of admiration from other participants to see that our two men were barefoot as part of the custome. Here is a picture. 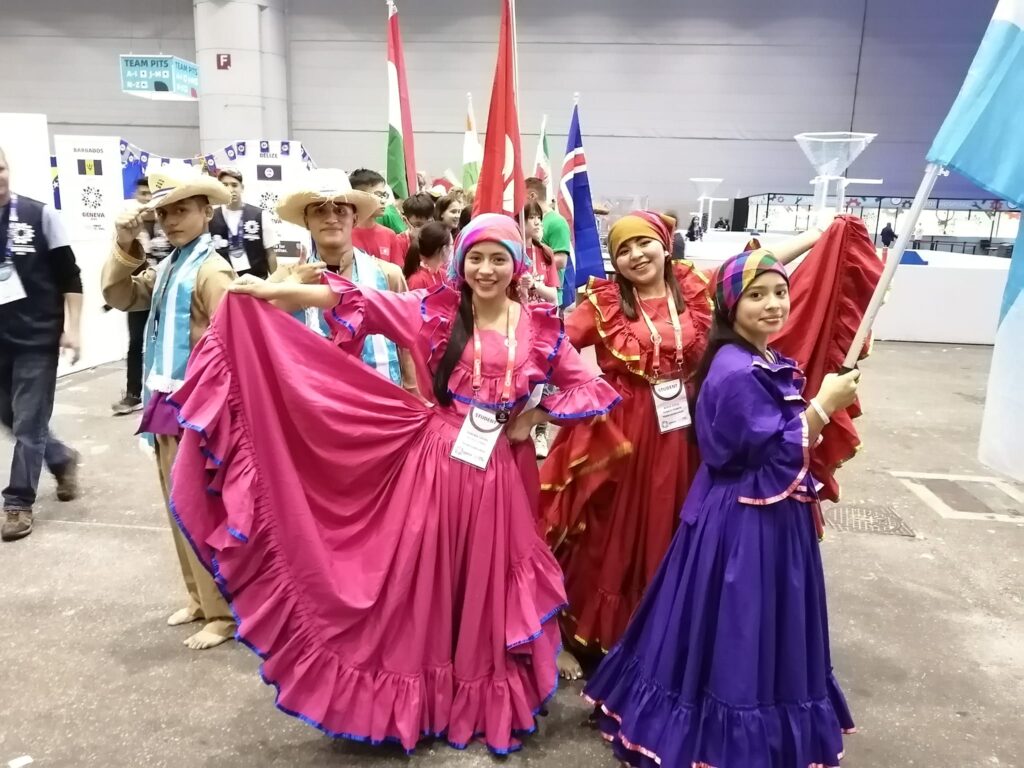 At the next day, the date of competition had arrived. The nerves, the emotions, and the tensions in the team was notorious.     In alliance with two other countries, twelve games were played, of which five were won, five lost, and one tied. Unfortunately, these were not the results we expected but there were situations that were out of our hands, among them, the disconnection of the robot with only twelve seconds after starting the game. In that case, there was nothing else to do, just wait for the 150 seconds to end the match. The team never gave up, they kept doing their best, they took with them the words of our mentor Alan, "it is better to die fighting than to give up”.

The Hondurean team with one of their alliance

When the students were asked about their favorite part in the competition, these were some of their answers:

Being present  at the competition  is very unique experience, but the most valuable part of this process is the opportunity given to the students to learn about STEM, explore their talents, increase their leadership skills and grow as future professionals. Learning about these are the fundamental pillars to face this highly competitive world of work.

Thank you very much to all our generous donors for giving these youth from our remote communities, the opportunity to show their talents and intelligence to the world!