It may have been something of an unanticipated event when Jefferson Smith (James Stewart) was appointed to the US Senate in the 1939 political-comedy drama Mr Smith Goes to Washington. I think we can say the same, as last Tuesday, the FIRST Global robot arrived in Honduras. Actually, it arrived about a week earlier than that. But just as the naïve Jefferson Smith did not understand the inner workings of Washington, DC, our Mr. Robot (as we have come to call him) was not thoroughly prepared to make his way through the formerly called Banana Republic. He was likely detained by custom officials in San Pedro Sula, then made the long overland travel to Tegucigalpa where he was passed off to a local delivery service. We’re not exactly sure what happened next, but we ended up paying a small ransom and he was delivered unscarred. In any case, when we finally met him in our CEO’s office in the Mall Miraflores, he looked no worse for wear, forty pounds of him still proudly displaying his shipping label “Robot Parts For Educational Use Only.”

Laura and I travelled to Tegucigalpa to pick him up on Wednesday, April 5. Whenever we travel to Tegucigalpa we expect that things will not go smoothly. But au contraire, we actually managed to pick up our residency cards at the Honduran Migration offices, retrieve our renewed passports at the US Embassy, and still arrive to Mall Miraflores by 11:00 AM. To us this was miraculous, but Mr. Robot was very quiet, perhaps concerned about what was to happen next. We took him to lunch at the food court (he didn’t eat a thing) and then on a taxi ride to our truck parked at the airport (we don’t drive inside Tegucigalpa, if we can avoid it). He had no idea he still had about six hours travel with an overnight stay before reaching his final destination in Camasca.

He seemed to lighten up a bit when we arrived at our humble, get-away home in La Esperanza. We generally take visitors and volunteers to our home in La Esperanza on their first night in Honduras. It gives us an opportunity to get to know them and orient them. But Mr. Robot still seemed a bit ill composed. Perhaps he’ll feel more himself when he’s finally assembled. The next morning, we subjected him to the hour and a half bumpy road to Camasca. He must have been thinking, “Where in the world are they taking me?” But we arrived without incident and showed him his new home at Shoulder to Shoulder’s Good Shepherd Bilingual School. He has a classroom all to himself as we’ve designated the room for the robotics team. They were still at the High School in class, so Mr. Robot rested from all his anxiety provoking experiences.

The team usually arrives at around 4:30 PM, at the end of the school day. But, on this day, they were excited about meeting their new companion, and they showed up early at 3:30 PM. It was an emotional meeting, like Christmas morning for five-year olds. They moved in on Mr. Robot, peeling away his cardboard shell to see what wonders lie inside. Mr. Robot was still not speaking, but it was clear that he knew well that he had found people who intended to care for him and love him. He was like the puppy that can’t get enough attention. And as each of the parts were pulled from the plastic bin, the oohs and awes synched into a harmony of joy. They found him complete with the exception of one or two wires and gears. We assured Mr. Robot and the robotics team that we would find replacement parts. 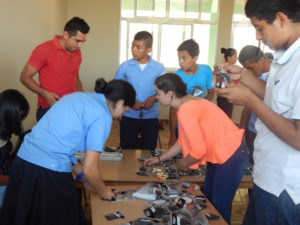 Now we all will wait for him to be put together, to become a unique creation. He will be something that Camasca, and perhaps all of Honduras, has never before seen. It will have to wait a little while. It is Holy Week and we are still in Honduras. Nothing happens in Honduras during Holy Week. He’ll sit safely and securely in his classroom. Perhaps he’ll dream of their next encounter when they’ll put pulleys on tracks, connect his electronics, and power him up. They’ll be back! They’ll construct him and give him a place in Camasca, in Honduras, and in our world. Mr. Robot has come to Camasca.